I’m so bored. Still. But there’s a lot to be thankful for. Still. And I’m trying to take note of it all. Which should be helpful during this chaotic period in our lives, right? Gotta try to look on the bright side, and since I’m able to, there’s no reason for me not to actually do it.

Technology always makes the list of shit that’s helpful to me. I can’t imagine what my life would be like if I was born in a time where I didn’t have access to a phone.

I’ve downloaded lots of apps. That’s partially because I was in the wormhole of YouTube videos where people talk about their favorite quarantine apps, but I have no regrets about watching them and downloading some of them. I’ve even organized and re-ordered my apps all on my phone, and it’s made me feel that much more put-together, for some reason.

Anyway, this isn’t really new for me. I always talk about how apps make my life so much fucking better. Mood tracking ones (Daylio and eMoods, specifically) have been on my phone for a long time now and are so useful in so many ways, and omg, please allow me to geek out about the graphs and charts and data they provide me with (doesn’t it make my insane mood disorder sound cooler to think of my symptoms as “data points” or something?).

You probably guessed where this was going, but (to be trendy as fuck) here are my favorite apps and ones I’ve been using during this endless quarantine:

I don’t remember where I heard about this one, but it’s super calming and makes me really enjoy guided breathing. It feels like forever ago that my therapist brought it to my attention that I can go long periods without actually pausing to take a breath haha. I’ve gone through phases where I’ve tried to stop and consciously breathe, and according to my fitbit heart rate thing, when I make an effort, it’s helpful in slowing things down to a more acceptable speed. So I’m really trying to make it a habit to steady my breath. I use Calm for peaceful background noise, and I actually currently have a month-long trial of a full subscription that I can actually meditate with, but I think Melly is more fun in a different way because you get to build a little zen garden thing. Super cute.

Guys. You know when you’ve hit a slump and you’re bored and you want some form of stimulation so you pick up your phone but you wind up just staring at it because you don’t want to read the news and you’re sick of social media and you don’t have the head to play a game or read an article or check your email so then you close it only to open it again and repeat until something just kind of…happens? Yeah. I downloaded this game (would it even be called a game?) where you basically just take pics of cats that come to your yard and play with what you put out for them. It’s a free game with no adds (amazing), and it’s so soothing and calming. It’s great to have on in the background and have something to do when I look at my phone for something to fucking do. 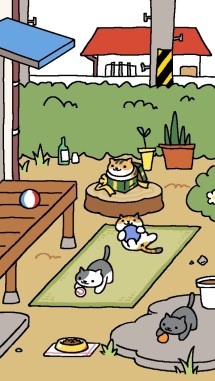 Honestly, I downloaded this because I had to see what all the fuss was about. Everyone is obsessed with it, and I don’t have a Nintendo switch. When I saw there was an app (called Pocket Camp), I started to play and I have to say, it really is peaceful and relaxing. Mindless but in a way that feels like you’re actually doing something. And it makes me feel included in the craze, whiiiiich makes me happy.

Oookay. This is a kid’s game. But I downloaded it a while ago when I was big-time anxious, and it helped calm me down and distract me from panicking. It’s colorful. You “cook” unicorn and rainbow themed foods. That’s it. I’m obsessed. It’s an oddly satisfying game, and even though it’s for kids, I have no shame about playing it because it’s fucking helpful as fuck when I get overwhelmed

The point of this “game” is to make people remember that there’s nothing wrong with not being productive all the damn time. Nothing wrong with just laying in bed and recharging. It’s like you’re in your bed, and there are little activities you can do to ground yourself or slow down or relax. It’s also just really pretty.

I use this one to help me get my writing done and focus a little better (since focusing is a constant struggle). It’s this little bunny you get to name and feed and keep happy. And you do that by setting the timer for however long you want, and then doing whatever you have to do. I also use the lo-fi music that comes with it, or if I want different focus-noise, the ticking of a clock sound. Aaaaaand it makes graphs, so I’m obviously a fan of that.

*I’m just gonna group all of these as one: YouTube, Netflix, Hulu, Disney+

Necessary, amiright? If binge-watching shows makes the days better, then why not do it? I also stream the news on YouTube and Hulu (although it’s been a while since I felt the need to do that).

It’s so obvious to say, but like. I have been obsessed with my Pinterest lately. I always enjoyed it, but once I couldn’t leave my fricken house, I sat down and actually organized all my board and pins into categories and whatnot, and it was so satisfying. And now it makes me happy to scroll through it all for inspiration and ideas and honestly just because it’s aesthetically pleasing.

Trying to be productive isn’t a bad thing. Obsessing over it and beating yourself up if you aren’t is a bad thing, but trying to do good things for yourself isn’t. I found this habit tracking app that turns doing what you want to do each day into sort of a role-playing game. It helps me make my days go how I want, it helps me get things done that I want to get done. And my motivation for completing my to-do list isn’t just “because I have to,” but because the gamification of my list makes it fun.

*my calendar apps and Trello for keeping me organized in an easy, colorful way

So yeah, I’m in no position to write any form of advice on how to be productive, but I think I’m certainly capable and qualified enough to write something on how to survive. I’m good at survival. (Is that something all of us with mental illness are good at?) And even though I’m not feeling like super put-together or on top of my shit, I’m still getting by, and I’m not unhappy or worried about soon becoming unhappy. And for me, after years of fighting with my moods, that’s huge.

I’ve gone through a few different phases during this whole thing, with varying degrees of motivation and frustration and productivity and enjoyment. It’s confusing. But there are small things that make me calmer or help me hold it together during the craziness. There have always been things like that, although I’d like to make a special shoutout to my lithium for being one major thing that’s allowed me to actually succeed in doing so.

I think I wrote this post because I was just overly excited about how much I love my phone???? But either way, I feel good about what I smashed onto this blog post, so have fun reading. Or don’t, no pressure.

||Coffee enthusiast, lover of books, Disney fanatic, planner addict. I like inspirational quotes, stationary and pens and stickers, taking/saving pictures of things that make me happy, and writing about nonsense. Rainbows are my favorite things. I think tattoos are awesome, and I want to get more. I'm going to publish a book about my having conquered anorexia one day. || I am here to properly document the lessons I'm learning as I journey to self-fulfillment. I'm trying to figure out my life, which is proving to be tougher than I thought it would be. But I'm determined to find the positive in this situation. And I will not settle for anything less than happiness and success. || It takes rain to make a rainbow! View all posts by ittakesrain 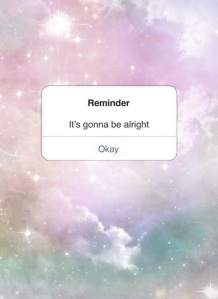