It’s another morning of another day, the start of another week where we’re gonna be doing a whole lot of the same thing (that thing being nothing). It’s actually kinda funny, the fact that we’re living in a weird “Groundhog’s Day” situation, and I definitely typed that with light humor as I try to see the bright side of things: I’m not dealing with the savage customers at work, I’m lucky to not be absolutely panicking about money, I’m at home with all my stuff and with technology that I swore I’d never again take for granted after not having it in the psych hospital. But the monotony breeds lots of stress, on top of the stressful uncertainty that everyone everywhere is feeling. Quarantine has taught me that doing nothing is tricky (which I already knew, but this confirmed that it’s not just me who finds it difficult; it’s actually a trigger for most people). More recently it’s taught me that I need to adjust how I approach this whole thing.

I’ll start where I am now. I’ve been so…unmotivated. I won’t say lazy, because that word doesn’t fit and because it doesn’t give me credit for the effort I’m putting into being my best self. It’s just that I haven’t gotten much done, though it’s not for lack of trying. This stay-at-home thing is a fight for me because I can’t stay focused. I’ll explain the whole story with my ADHD and stuff later, but suffice it to say that it’s causing me grief. I have all the time in the world to write and work on my fun personal projects, and I can’t fucking concentrate. It’s ironic in the most infuriating way.

Anyway. What have I been doing? Well, I’m glad you asked. I looked back through my journals to get an accurate answer: I’ve been trying to stick to a structured routine. That’s something most bipolar people should do all the time regardless of pandemic or not, but it’s obviously more important during one, and it honestly just makes me happy to check things off a preset list because it gives me the surge of dopamine accomplishing something gives me. And it’s like, legitimately healthy. Like, I try to complete all my habits and track them along with my moods and other info. It makes me proud of myself. I have of course been writing (and exploring new opportunities with that). I’ve been video calling my friends and family (I am endlessly thankful that we have the ability to do that). I try to go for walks. I journal and scroll social media and read articles and play gaming apps. I watch YouTube and I must have binge-watched Family Guy fully like twice already (it’s one of those shows I can enjoy without having to actually focus on it).

I guess that seems like enough shit to do, but it barely fills one day, and it isn’t fulfilling, especially because it’s the same daily. It’s not like these days are much different than a normal day off from work that I would have had during the previous version of my normal. But it’s not broken up by anything. It feels less meaningful (which sucks because I have so much more time to work on what I actually DO find meaningful).

If I had to summarize the last month? Boring. I also think the word “mundane” fits, and actually I think that works with what I’m trying to do here because it reminds me of poetry by Tyler Knott Gregson where he talks about the “miracle in the mundane.” Seeing how the normal, seemingly trivial parts of life can be beautiful.  It’s a lot like how finding joy in the little things makes us feel better about life.

So, what can I do this coming month to make it better than the previous weeks? Uhhhh, oh man, let’s see.

Try to change up my routine. Mix up the order. Add new things. Take some things out. Get creative with it. Maybe I’ll start by binging a show that isn’t Family Guy haha. Maybe try to make something totally random into a daily habit. I can’t think of anything right now but I promise I will. Oh, here’s a sort of related but random idea: make my coffee differently every time I make it for five days (and I drink at least two cups a day, so that means finding a bunch of different recipes or tweaks). Okay, this paragraph is actually getting me really excited. I’m gonna make an actual plan and set goals and shit for this. New week, new goals. Renewed motivation (because I’ve been reading stuff about how motivation isn’t a permanent thing and needssss to be renewed a lot, which is just how it is and that’s fine). Yeah okay I’ll update again at some point, but I’m hoping the next few weeks are more…I guess I’ll use the word exciting because that’s what I want it to be and I wanna attract that shit. Boom. 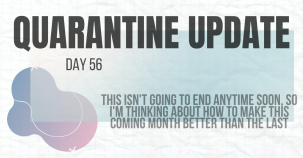 ||Coffee enthusiast, lover of books, Disney fanatic, planner addict. I like inspirational quotes, stationary and pens and stickers, taking/saving pictures of things that make me happy, and writing about nonsense. Rainbows are my favorite things. I think tattoos are awesome, and I want to get more. I'm going to publish a book about my having conquered anorexia one day. || I am here to properly document the lessons I'm learning as I journey to self-fulfillment. I'm trying to figure out my life, which is proving to be tougher than I thought it would be. But I'm determined to find the positive in this situation. And I will not settle for anything less than happiness and success. || It takes rain to make a rainbow! View all posts by ittakesrain

One thought on “Quarantine Update: day 56”