I’ll start by saying that although I enjoyed some of my math classes back in school, it was never a particularly strong point of mine. So the info about probability might not be suuuuper accurate (despite me having a few tabs about it open on my browser). I’m thinking about it more metaphorically, and not at all in-depth. Go with me.

Because it’s just that every morning I wake up early and think to myself that I’ll be able to make the day a good one. And every day (for a long while now, and for what, a billion times before in a billion episodes before?), either the external world or the world within me doesn’t take long to pulverize that thought. So I’m currently thinking about probability as it applies to my life and my moods and my happiness.

I probably don’t need to state the obvious, but I had another earthquake of a panic attack last night. Took two of my pills that are supposed to help, because one clearly wasn’t enough, for whatever god-forsaken reason, and I was desperate to have a moment of relative calm. Desperate.

I ultimately got there, and I relished those moments before going to bed. How can I describe tasting freedom? There aren’t enough words at my disposal right now.

Right, so then I wake up today. Start going about the routine I cling to for dear life because regular routines and schedules are supposed to be good for us bipolars. I noticed a pretty sunrise outside the kitchen window while I was making my coffee and went outside to take a picture. The sky looked like cotton candy and I had that thought again: maybe today will be a good one. 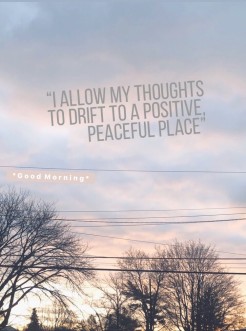 (I edited some words onto the picture, because that’s how I try to appreciate positives, so enjoy) ^

But, unsurprisingly, I’m beginning to feel…not right. Could be that I’m anticipating it (how can I not, literally explain to me how I can not). Could be that I’m thinking myself into it (I don’t think that’s an actual thing, but it’s still something I worry about, which is weird). But regardless…fuck.

Sooooo what IS the probability that today won’t go to total SHIT? I have to divide the number of events by the number of possible outcomes.

How many possible outcomes are there? Is it just the two? One being that I’ll be okay and the other being that I’ll feel intense fear over nothing, cry my way through work, suffer internally in ways I’m sick of explaining, and come home to hide in my bed unable to shale the unceasing feeling of dread? There’s just the one event, being this one particular day. So is the probability that I’ll be okay just 1/2?

I think there are more factors involved, but hey, I like the odds when I think of them like that. It’s half and half.

This is some serious positive thinking, btw. Which has been immensely difficult, though not for lack of trying.

Furthermore, defining what I mean when I say “I’ll be okay” is pretty difficult because I don’t even know what I mean by that anymore. Been a while since I’ve felt whatever it is that that feels like. (Jeeeeez, all I do lately is bitch and moan, sorry!)

My posts aren’t even very essay-like anymore, which I guess might be a good thing, although I doooo love my essay-rants.

Anyway. Here’s to having an “okay day.”