I had a panic attack last night after doing literally nothing. Like I had a good day, it was productive and relaxed, but by like 4 I just couldn’t push away the stabbing sensations of anxiety that had been ripping into me all day. I’d run out of bandaids. And like, can anyway blame me for being defeated and broken? For giving up?

But memes are my coping skill haha, that definitely counts right? 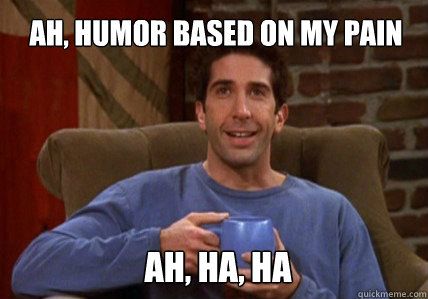 I’m trying to put into words why they’re so valuable, and why humor in general is necessary for my survival (and I’m assuming the survival of everyone else who’s damned with mental illness, or even just unfortunate life circumstances).

Off the top of my head:

Apparently, finding humor in the face of shitty shit makes us more resilient (a word I totally relate to, but it’s definition, the capacity to recover quickly from difficulties fails to address the fact that I don’t recover quickly, I can’t be expected to, and I have no choice but to drag my ass into recovering…so keep that in mind when I use it). That isn’t some earth-shattering discovery, but it says it on everything I’m reading, so…

Have some resilience, and try to have a less-than-excruciatingly-depressing day ❤